When thinking of the late great Gary Moore’s guitars, his 61 red Strat and Peter Green’s Burst immediately come to mind. But those two guitars took over in the middle of Moore’s career, after the pivotal album Still Got The Blues (1990).

Before that, the Irish genius was a big fan of superstrats, a design that he appreciated both for its functional and comfortable shape and for its big sharp sound. Back then, his playing was flashier, faster and more virtuosic, more hard rock than blues.

In the eighties, no brand was better at creating superstrats than Jackson and Charvel, both sides of Grover Jackson’s creation (who separated the two starting with the model created for Randy Rhoads in 1980). Among Jackson’s greatest hits, the Soloist is the queen of speed machines of that era, a smaller evolution of the Strat (at the ⅞ scale), with a through neck for a much easier reach to the last notes of the fretboard.

This 1986 Soloist has been made especially for Gary Moore following his specs, and then he used it for one of the most important albums of his career, Wild Frontier (1987). On the cover he is holding a Gibson Switchmaster, but superstrats can clearly be heard on Over The Hills And Far Away, Friday On My Mind and The Loner. This white beauty also went on tour with Moore for the concerts that followed the album’s release.

As on many superstrats of the era, the pickup configuration is HS (meaning bridge humbucker and neck single coil) with Jackson pickups (which were good enough for Gary, so they probably don’t deserve the bad rap they usually get). The Floyd Rose licenced Jackson vibrato is an early version without a cavity behind it, therefore notes cannot be pulled too sharp but the vibrations of the strings are more fully transmitted to the body. The sharkfin inlays on the fretboard are the unmistakable visual signature of a Jackson. Moore has had many guitars throughout his career, and this one is a witness to a period that deserves to be put back in the spotlight. 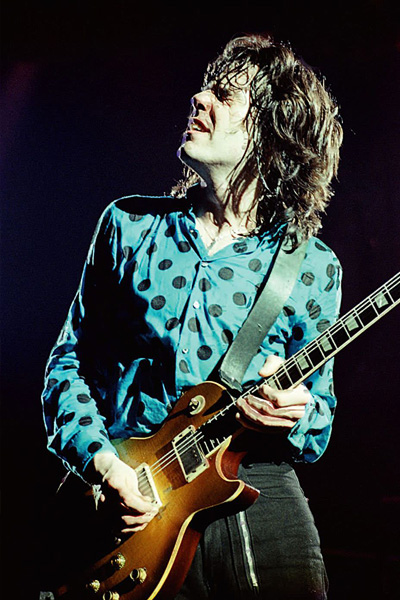 Irish guitar hero Gary Moore is the proof that an artist can reinvent himself, even if he is a guitarist who has already experienced a fair amount of success. Gary Moore has gone through very different musical decades and has never stopped evolving in the process. His professional career started in 1968 in the band Skid Row (the Irish band of the 60s, not to be confused with the LA band of the eighties of the same name) when he was only sixteen. He then joined Thin Lizzy in 1974, the result of a lasting musical friendship with singer / bassist Phil Lynott.

Moore’s playing was already a mixture of rock and blues, under the influence of his hero Peter Green, from whom he bought the famous Fleetwood Mac Les Paul, the Burst with out-of-phase pickups that can be heard on Albatross. Green’s influence can be heard in Moore’s lyrical approach, a side of him that is particularly important when he plays ballads. That finesse made Parisienne Walkways a smash hit in 1978 on his second album Back In The Streets. A year earlier, Moore had been part of the album Electric Savage by the prog rock band Colosseum II. Eclectic indeed!

Moore left Thin Lizzy in 1979 to concentrate on his solo production, starting with the G-Force project and then a series of heavy metal albums with Dirty Fingers, Corridors Of Power and Victims Of The Future. Early on, Moore gave up on the idea of finding a singer that would correspond to his vision and took to singing himself. Wild Frontier in 1987 is the beginning of Moore’s fascination for traditional celtic music, and the real revolution came in 1990 with Still Got The Blues. The title gives it away: Moore plays long, slow songs in a blues style that he would never fully embrace before that.

The following albums further explored this new direction, until Dark Days In Paradise in 1997 that integrated techno. But as the name of the Back To Blues clearly indicated in 2001, that new musical adventure was short-lived. Since then, he kept the blues power trio formula going until his death in 2008, but his influence and heritage go way beyond that. Indeed, every period from his discography has touched thousands of musicians.