The late ‘70s could have been the end of the road for the good old Stratocaster, were it not for a set of hardcore enthusiasts in England. They were Hank Marvin fans who decided to bring the snappiness of the intermediate positions back into the spotlight by using them in their synthetic pop mixed with American overtones between Bob Dylan and J.J. Cale. When the Knopfler brothers formed Dire Straits, each had their own Strat: red for Mark on lead, and black for David on rhythm.

David Knopfler’s Strat had a natural finish when he first got it (a standard refinish from the 1970s), so he decided that this April 1962 Stratocaster would be black, carefully avoiding the red reserved for his brother. It is on this Strat that David—who should really be much better known and recognised for his contribution to the band’s sound—recorded his rhythm tracks for the band’s first three albums: Dire Straits in 1978, Communiqué in ‘79 and Making Movies in ‘80, although on that last of the three his tracks were re-recorded following his decision to leave Dire Straits. So, this is the Strat we hear on Sultans Of Swing, Lady Writer, and Once Upon A Time In The West.

Of course, the electronics have been replaced over the years, as the musicians of the time discovered the possibilities offered by brands specialising in specific parts. At one point, there was even a humbucker in the middle position. We can also see modifications at the back with a protective panel cut at the right height to allow easy access to the strings, essential if you have to change a high E in the middle of a gig. We can also see that a wedge has been inserted to block the tremolo in place, further proof of the rhythm role attributed to this Strat. A historical instrument, the sound of which can still be heard several times a day on classic rock radio stations. 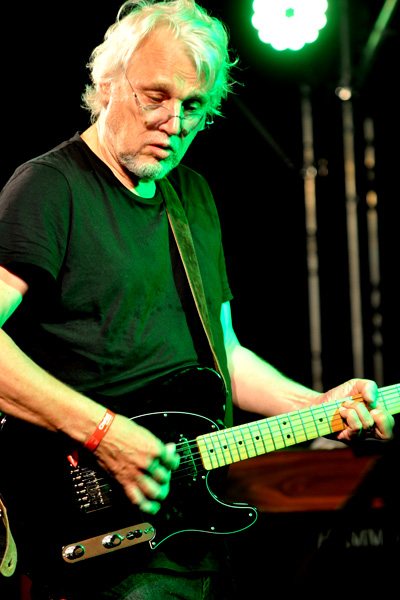 When you think of Dire Straits, the superstar band that proved that the Strat still had a say in a world dominated by Roland and Yamaha, you immediately think of Mark Knopfler, one of the last great guitar heroes. However, his younger brother David had an equally important role in inventing the band’s sound. While Mark was an adoring fan of Hank Marvin of the Shadows and only conceived the world through the guitar, David was a fan of folk music and was equally interested in the piano and the drums.

That difference in perspective meant that the distribution of roles was decided very naturally between the Mark (lead) and David (rhythm), with all the unglamorous nobility that the latter role implies. The rhythm guitarist is the one you don’t see, you don’t hear, but who is the glue holding it all together. An excellent rhythm stylist like David Knopfler must be able to put his ego aside to provide the constant interface between the front section (lead guitar and vocals) and the back (bass and drums).

Before the group was formed, David was a social worker and shared an apartment with John Illsley, who played bass in Dire Straits. Indeed, it was David who had the fateful encounter that would set everything in motion. The album Dire Straits was finally released in 1978, then Communiqué followed in 1979. The frenetic pace of touring and recording became too heavy for David and set the two brothers at odds with each other, to the point that Mark erased all of David’s guitar parts on the next album, Making Movies. However, Mark suffered exactly the same anguish a few years later, which pushed him to put an end to a group that had become too big for him.

Far from the colossal machine that Dire Straits had become and tired of the countless intermediaries who gravitate around such an entity, David Knopfler’s interest turned to the business aspect of music and he took his recording destiny in hand by setting up his own label. He even wrote a guide on the subject a few years later. His first solo album with a very clever title, Release, was released in 1983 and featured John Illsley and Mark, proof that the fraternal conflict was short-lived.

The masterpiece of David’s extensive solo discography was released in 1991. The superb Lifelines, which he recorded in Peter Gabriel’s studio, highlights Knopfler’s softer and soulful side, singing with unquestionable talent. Since then, he has recorded one album after another and never disappointed, always with his signature sound. The eternal little brother even published a collection of poems in 2005, proof that his artistry asks only the opportunity to express itself through any means.