On the basis of its year of manufacture alone, this superb Jazz Bass would be a prized specimen for any collector—1961 being the debut year of the model that would become the other great benchmark electric bass. There is also the matter of its concentric control knobs—instead of the usual three knobs—an extremely rare feature only found on the very first models.

But this Jazz Bass also represents a piece of history, since its former owner is none other than Pino Palladino, the most prolifically recorded bassist of the ‘80s. We can hear this bass on most of the sessions he recorded (and God knows he recorded a lot of them), but it also appeared on stage when he played alongside The Who or in the John Mayer Trio, (undoubtedly Mayer’s best period and the best band he has played with).

This Jazz Bass received active electronics in the 1980s, as was then common for professional instruments. But Palladino had the presence of mind to keep the original pick guard with the pickups and control knobs intact. This workhorse has now been returned to its original configuration, but retains the traces of the cavity for the battery if you look at the back. Like any bass that has been used a lot, it has received new frets and is therefore ready to roll out its round and hot groove for many years to come.. 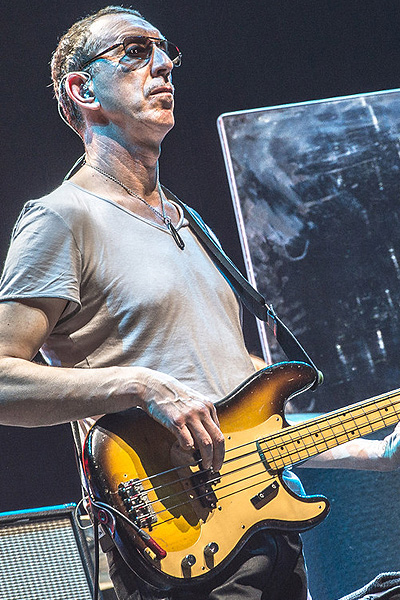 Pino Palladino is not a superstar among the general public, but in the world of musicians and music lovers who linger on record booklets, the man is a true legend. The Welsh bassist has played on such an impressive number of albums that it would almost be faster to list the hits from the ‘80s on which he does not play.

It all began with Gary Numan’s 1982 album, I Assassin. He then played on Paul Young’s first album and from that moment on he became a secret weapon of choice for all producers. He can be heard on tracks recorded by David Knopfler, David Gilmour, Tears For Fears, Pete Townshend, Elton John, Don Henley, Phil Collins, and Melissa Etheridge. With all those different artists, he built his signature sound with fluid fretless basslines, an ever-irreproachable musicality and precision with the big octave sound he got from his Music Man StingRay.

In 2000, he reinvented himself for D’Angelo’s legendary album, Voodoo, on which he used his Precision and Jazz Bass to lay down huge grooves that set the subwoofers trembling. From that point, he became the bass player of choice for recording artists in the new millennium, including Adele, Ed Sheeran, John Legend, and even Nine Inch Nails. He also played regularly with Jeff Beck, and even replaced the late John Entwistle in The Who from 2002. Finally, in 2005, he joined Steve Jordan on drums and formed the luxury rhythm section of the John Mayer Trio, a group that finally allowed Palladino to stand out in the eyes of the public for his elegant and effective artistry.