In the face of the baby boomers’ enthusiasm and bottomless wallet, guitars that belonged to the idols of the sixties broke auction records, from Dylan’s Strat to Lennon’s acoustic. But the generation that grew up in the 2000s is beginning to make itself heard, and in the future the most prized instruments will surely be those that have belonged to recent icons, the rock stars of the new millennium.

Billie Joe Armstrong holds a special place among such musicians, with 85 million albums sold by Green Day, whose masterful frontman he has been since 1986. Since 2004 and the album American Idiot, the punk trio has reinvented itself as a stadium rock mammoth with an undeniable talent for power ballads.

For a songwriter like Armstrong, a good dreadnought is a tool of choice; the best way to give birth to a song before it is cut to pieces on a Les Paul Junior. This luxurious Martin D-41 from the 1970s is one of the instruments that inspired several songs, as evidenced by the wear and tear at the back of the neck due to a Capodaster clamped in the first or second fret—a sure sign of the kinds of tonality typically required in the creative phase. We can also see a few scratches and a crack in the top between the bridge and the soundhole. All of which are under control, of course, but leave no doubt that this Martin lived with Billie Joe in his day-to-day life as a songwriter.

The D-41 was released one year after the reissue of the D-45 in 1969, and it represents a less flashy but equally appealing alternative. Above all, we heard this large-format beauty on the 2009 album 21st Century Breakdown (4 million copies sold), notably on the track 21 Guns, one of the band’s most successful singles and one that gives pride of place to the great strummed acoustic. 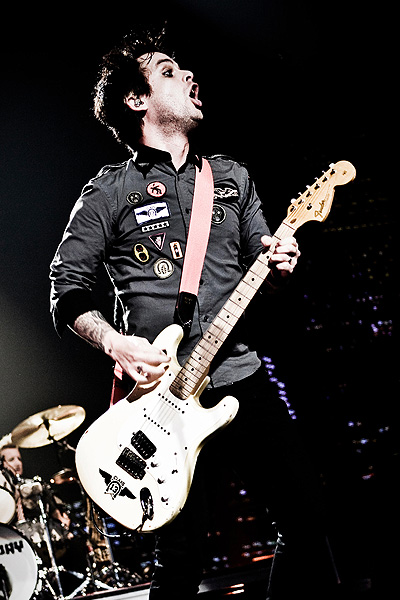 The dirty rock kid, the eternal teenager who appeals to punks and goths alike, the Pete Townshend of the 2000s... Billie Joe Armstrong, singer and guitarist of the Green Day trio, is a character who never ceases to be fascinating. His right hand is a real riff machine, and he has restored respect for the aggressive and energetic rhythmic playing of Californian punk.

Armstrong started Green Day in 1986, with Mike Dirnt already on bass. The current drummer, Tré Cool, arrived in 1990, and the band has remained the same since then. The band has had colossal success on several occasions, and you have to admire their achievement in creating two peaks in their careers ten years apart; an unexpected and very rare phenomenon. Their first huge success was the album Dookie in 1994 (10 million copies sold), propelled by the single Basket Case. Their second triumph came in 2004 with the rock opera American Idiot and its 16 million albums sold. The recipe (big riffs and choruses to make a whole stadium sing along) remains the same, with a few additions that hit the mark, including a taste for acoustic ballads that got them huge hits with Wake Me Up When September Ends and 21 Guns.

In addition to Green Day, Billie Joe Armstrong is also part of the punk band Pinhead Powder. That lineup also includes Jason White, who tours with Green Day as an additional guitarist. On the softer side, he also recorded a duet tribute album to the Everly Brothers with Norah Jones, the magnificent Foreverly in 2013.For that acoustic album, he played a Gibson Everly Brothers, which makes sense. But his preference as a guitarist is above all electric and simplistic. He is known for his love of the Les Paul Junior model, either single cut or double. He has even had two signature Gibson models with a single P90 pickup, but has also been seen with Telecasters, Les Paul Custom Black Beauties, and a breathtaking array of other beautiful guitars. And among all that, his most famous guitar—the one he already had for Dookie and which represents his unalterable punk spirit—is of course Blue, a kit Strat covered with stickers and whose only pickup is an active humbucker in the bridge position. Simple, direct, and effective, like its owner.