Steve Howe is known not only as the guitarist of the legendary British progressive rock band Yes, but also as one of the most curious and demanding collectors in the business. He did not focus his collection on a particular type of guitar, but rather looked for the most original models, and those that sound the best (after all, he always remained a musician first and a collector second).

This Gibson double neck was one of the jewels in his crown, as EDS-1275s dating from before the SG double neck are extremely rare, and of course even rarer when they are finished in black. The factory black finish was a custom request at the time, and it is unlikely that you will come across another one. This first version of Gibson’s 12-string/6-string double neck is hollow, and therefore resonates with a much deeper musical depth than later models. And since this beauty dates back to 1960, it is equipped with four PAFs. Lucky for us, all four of them sound beautiful, which is not always a given.

When Steve Howe bought it from George Gruhn in the early ‘70s, the head of the six-stringed neck had already been repaired, and the only modification made by the British master was to replace the original machine heads with Grovers. As a result, this beauty is in the same condition as during the decades spent in his hands. 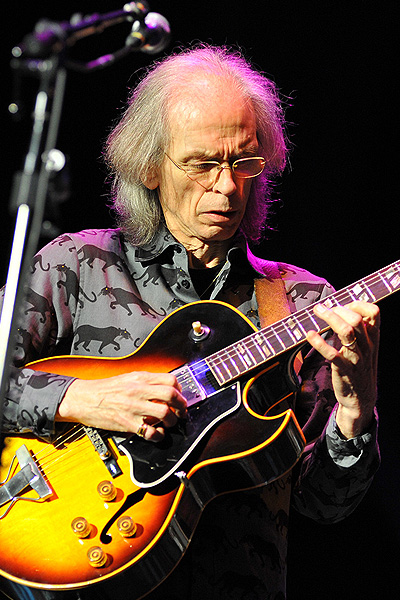 As a guitarist, Steve Howe is a colossus. He is colossal first in his creative scope, since in addition to being the architect of the sound of the British progressive mastodon Yes, he formed the groups Asia, GTR, and Anderson Bruford Wakeman Howe, and released no fewer than twenty albums under his own name.

But Howe is also a giant among collectors, which was even documented in a beautiful book published in 1993 which shows the incredible variety of guitars acquired by the master, from the most classical to the most eccentric, as well as curiosities such as a Gibson harp guitar or lap steels from the 1950s. All those instruments were of course played in the course of his many recordings, and he consciously used some to flavour the sound of legendary albums. On Close to The Edge (1972), for example, we hear almost exclusively a Gibson ES-345. On Tales From Topographic Oceans (1973) it is a Les Paul Junior, and on Relayer (1974) we hear a 1955 Fender Telecaster.

Yet Howe remains indelibly associated with the ES-175, a guitar originally designed as a cheap version of Gibson’s legendary archtops, but Howe proved it could hold its own with the juicy distortion of a Vox AC30 or a Marshall Plexi. This was his main guitar when he joined Yes in 1970 to replace Peter Banks. Howe imposed his more virtuoso, more rock, and more varied palette of colours on The Yes Album in 1971, but it was really with Fragile, released later that year, that the band found its true personality within the pantheon of progressive rock. He even achieved considerable commercial success with Roundabout, an eight-and-a-half-minute veritable pop opera that opens with a delicious classical guitar part composed and played by Howe on an old Martin.

After a series of albums that had made a name for the band, Yes broke up in 1981 and when the group reformed with a much more pop and synthetic orientation, Howe was no longer part of the lineup. He then formed the supergroup Asia, whose first eponymous album released in 1982 was a resounding success. From then on, the versatile guitarist explored a range of exciting musical avenues, and finally rejoined Yes in 1991. He is still in the band today, and tours with his signature ES-175. He may have allowed himself to be seduced by digital amplification, but his playing has lost none of its superb quality and his fingers are still the magical element of the band more than 45 years later.