You wanted the best, you’ve got the best, KISS! Whether you are a fan or not, it is undeniable that Kiss is THE band that has inspired millions of Americans to learn to play the guitar and form a band. These true Beatles of the 1970s have become the stuff of legend, and their merchandise business continues to flourish.

You can spend your life sporting the band’s logo, from t-shirts to condoms, even a coffin! And of course the many signature instruments. But paradoxically, the instruments played by the band members do not often appear on the market, far from it. Moreover, this Washburn Flying V was acquired directly from Paul Stanley himself, and the Starchild dedicated it with this meaningful sentence: “I Rocked This Guitar Extensively Around The World 2009-2018”. And during those nine years, this Washburn was not just a decorative instrument used for two or three songs. With the exception of Detroit Rock City, for which he used a much cheaper instrument that he then gave to someone in the crowd, this Flying V was used for entire shows during the tours of the Sonic Boom and Monster albums.

This Flying V is a unique specimen, as attested by the “1 of 1” that precedes Stanley’s dedication. Washburn is a long-time partner of the guitarist (who has greatly contributed to their reputation in the field of electric guitars), and they spared no expense in making this jewel in their American Custom Shop. The top with its diamonds are obviously the feature that first draws the eye, but it also has a Buzz Feiten neck and a unique Seymour Duncan Custom 5 pickup. A real flashy rock machine as it should be. 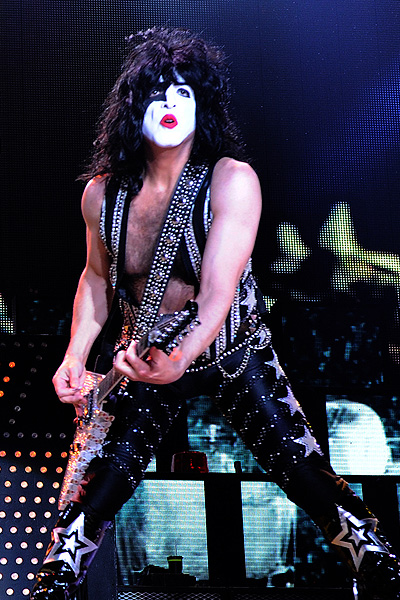 In the United States, Kiss is much more than just a band: it is a religion, a cultural phenomenon of staggering proportions (their fan club, the famous Kiss Army, even has former Secretary of State Condoleezza Rice in its ranks). Each American has their story with Kiss, how they encountered the band’s music, how they went trick or treating in Starchild or Demon’s makeup for Halloween, and for many, even how they decided to learn to play an instrument when they first heard Kiss.

The members of the band invented the pyrotechnic show, and their mastery of merchandising is enough to inspire even the most venal of managers.

The co-founders, Gene Simmons (bass/vocals) and Paul Stanley (rhythm guitar/vocals), are the two pillars of the group. They were there in 1973 and are still there today for yet another farewell tour. The two form a hard rock duo like Lennon and McCartney, with a song-writing talent that is hard to deny, given how many of their songs have become lasting hits. Of the two singers, Paul Stanley is the one with the higher and bluesier voice, with an immediately recognisable timbre. His guitar playing is sketchy, but he has the secret weapon that most rock musicians dream of: a right hand born for riffs, capable of getting a whole stadium tapping their feet. Ace Frehley was the ultimate flamboyant soloist, while Stanley occupies the stage with his charisma and the big Marshall sound that he gets from his guitars.

Over the years, Paul has amassed a very fine collection, including a few sunburst models that he uses exclusively in the studio. On stage, we used to see him playing the Ibanez Iceman that remains closely associated with him, and then he switched to Washburn, who are currently making his excellent signature models. Platform boots are not included, but highly recommended.