In the middle of the 80s, Iron Maiden’s sound adapted to the trend of the time and started incorporating synthesizers. The band would thankfully not become a phony new wave band with drum machines but simply mixed new electronic sounds in with their strong heavy metal. However, they have never officially integrated a keyboard player into the band (even though Michael Kenney has been playing it on the side of the stage since 1988), and so they needed to find a way to trigger these sounds when playing live: that is why Adrian Smith, second guitar player of the band since 1980, got into guitars MIDI.

This white Jackson Dinky - a shape and color now inevitably associated with Smith - is one of the custom guitars he ordered at the time to suit his needs. As its numerous knobs show, it is fitted with a hexaphonic captor with a MIDI output that is independent from the regular magnetic pickups sound, in order to blend in the traditional sound with its synthetic counterpart. This amazingly technological monster (for the time of course!) has been used for the recording of Somewhere in Time - the first album after the band’s foray into progressive rock which came out in 1986 - and also for the tour that followed its release. It also appears on Seventh Son of a Seventh Son in 1988, the last album with Smith as a member of the band, and also his last tour with Iron Maiden before his reintegration in 1999.

This Jackson remained among his favorites since Smith has also been seen playing it with The Untouchables. A piece of guitar technology history and a piece of heavy metal history, all in one guitar. 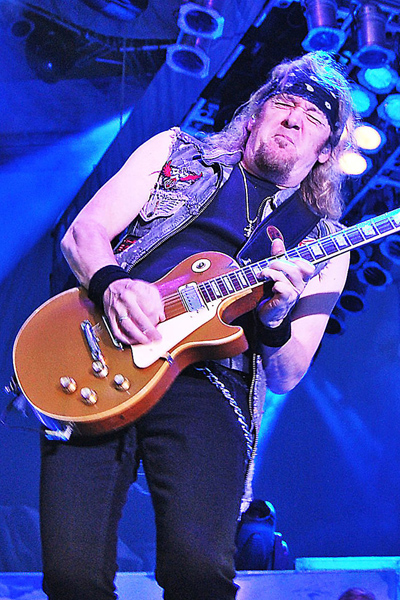 It seems like fate has decided that the two guitar players for the heavy metal behemoth Iron Maiden are bound to play together for all their life. Indeed, Adrian Smith has started out as a singer in Dave Murray’s first band, before learning how to play the guitar under the influence of his friend, inspired by blues rock musicians like Johnny Winter. He would remain the bluesy and wild counterpart to Murray’s more fluid and technical sound. The two then created the band Urchin, which Murray left to join Iron Maiden in 1978. Smith wanted to give Urchin a fait shot and therefore refused to follow his friend, but he finally made the jump in 1980 when his band finally imploded.

This is how the band found its definitive guitar duo. Murray and Smith play harmonies together, they play off each other and try to outdo each other in the creativity displayed for their riffs and solos. Smith also is a brilliant songwriter, and he started contributing to the band’s songs when singer Bruce Dickinson joined the band in 1982 for the album The Number of the Beast. Smith has written classics like 22 Acacia Avenue or the immortal Two Minutes to Midnight riff from Powerslave.

Following differences in creatives visions with the bass player and commander of the band Steve Harris, Smith left Iron Maiden in 1990 after the Seventh Son of a Seventh Son tour. He started the band Psycho Motel with which he recorded albums and toured, but then put his band on standby when Dickinson, who had been replaced in Maiden in the meantime, asked him to join his solo project. The duo resumed their joint songwriting adventure with two songs for the excellent Accident of Birth in 1997, and two songs for The Chemical Wedding the following year.

Eventually, in 1999, Dickinson became the Iron Maiden singer again and he brought Adrian Smith back with him, who therefore became the third guitar player in the band along with Murray and Jannick Guers, who had stepped in while Smith was gone. The fantastic Brave New World was the first album by a reunited band in 2000, and the band has not stopped recording albums and touring the world for sold out gigs since.