The first SGs are fascinating instruments. That transition phase—the short period during which the SG Cherry Red was still called a Les Paul—produced guitars that are among the best solid bodies ever manufactured in Kalamazoo, Michigan. Of course, these SGs are not beyond reproach, especially their tremolo system, which only works very sporadically and has the irritating habit of putting the instrument completely out of tune.

Whether it is the Sideways tremolo of the initial period or the Vibrola of the following years, neither design has gone down in history as a model of efficiency. But it is always difficult to make the decision to change it, as any modification to a vintage guitar can lastingly affect its value. As such, an SG like this ‘62 model that has already been converted with a stoptail is the ideal tool for a real musician who is looking for a usable instrument with the sound of a great vintage one. Moreover, the conversion left a very pretty scar on the lower body, a trace that also makes this SG stand out from the crowd.

Indeed, it is recognisable in pictures of Johnny Marr, since it belonged to the legendary British guitar hero who used it as his main instrument in The Healers. This SG’s two PAF pickups combine the nervousness and thickness he needed for that indie rock band. Those who are familiar with Marr’s high sound standards will be reassured of the instrument’s quality. Marr has always been someone who searches for new sounds, hooked on the most captivating musical textures.
As specialists know, the vintage guitars that sound best are not necessarily the mint-condition museum pieces with all their original parts. This SG proves the point, since it is simply one of the best examples of the model. 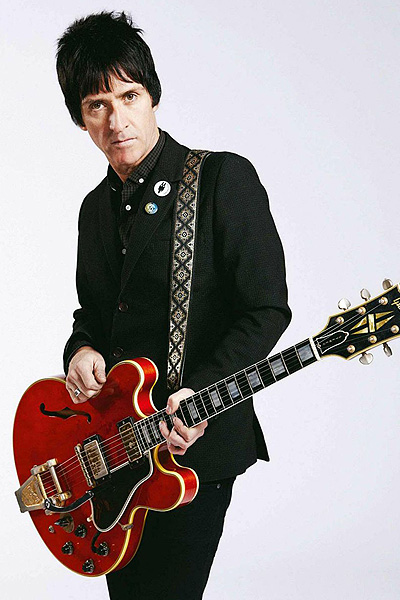 As a member of one of the most important British bands of the 1980s, Johnny Marr could very well have given up in the face of the invasion of synthesisers and relegated his guitar to the rank of a discreet rhythm instrument. On the contrary, he made The Smiths’ four albums manifestos for the enormous diversity of sound that someone with a rich imagination can get out of a guitar.

And, of course, he used the chorus effect that was typical of the time, giving the music a round and warm side that many people missed. But his originality was above all in his choice of phrasings, in the way he voiced chords, his tunings and placement of Capodasters, and his intelligent and very original use of open strings. None of his guitar parts are simple, and all contain ideas that have become an integral part of the song, to the point that something is missing unless you play them exactly the same way.

The diversity of the guitars he used was a reflection of that richness of sound: Rickenbacker, a hand-crafted Telecaster, and of course his superb 1959 ES-355. When The Smiths broke up in 1987, he became a sessionist musician, and as a result he can be heard on Beck or Talking Heads tracks. At the same time, he pursued a parallel career in several groups: The Pretenders first, then The The, Modest Mouse, Electronic, and The Cribs. But the most exciting side of his musical personality is expressed through his personal projects: Johnny Marr & The Healers, for which he played a superb Cherry Red SG. Then his solo albums, on which we hear the excellent signature Fender Jaguar that bears his name. A musician like no other and who demands a great openness of mind from the fans who follow him from project to project.