We all know Dave Murray’s black Strat, that legendary 57 which used to belong to Paul Kossoff before finding its way into the hands of Iron Maiden’s virtuoso through a classified ad in a magazine. But the true fans of the biggest British heavy metal band know full well that it is not Dave Murray’s only black Strat : he can sometimes be seen playing a guitar with an oversized head and a rosewood fretboard, which had gone through several modifications before taking on its current shape.

Like Gilmour’s Black Strat, this 1979 Stratocaster - with the oversized black logo - was Murray’s experiment and he kept changing it until he found the sound he was looking for. It originally had a black pickguard that can be seen on the video of the epic 1981 concert in Breme, a live video broadcast for the Beat Club TV show.

It is one of singer Paul Di’Anno’s best performances, and Murray also seems particularly inspired. For the first half of it, he played on the Kossof, then for “Sanctuary” (their single at the time), “Killers”, “Another Life”, “Phantom of the Opera” and “Iron Maiden”, he can be seen playing that very Strat. Incidentally, it was already equipped with an HSH configuration even though the pickups clearly seem different.

Even though there are no pictures of Murray playing that guitar during the recording sessions, it can be heard on some parts of Killers (1981) and The Number of the Beast (1982). Today, the pickguard is white and the pickups are Seymour Duncans, the classic pairing of a bridge SH4 and a neck SH59. A bona fide tool that belonged to one of the most prominent craftsman in heavy metal. 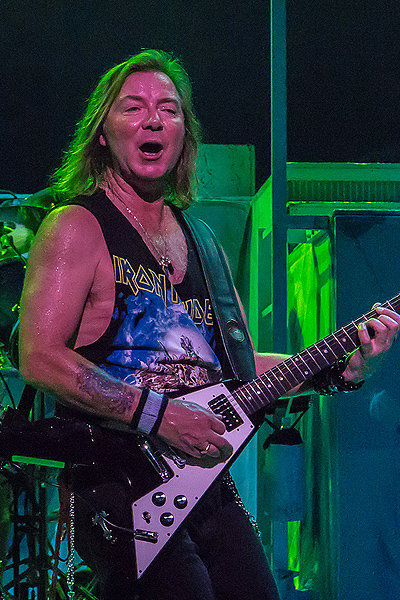 Bassist Steve Harris is the unquestioned master and commander of the ultimate New Wave of British Heavy Metal band, but Dave Murray is undoubtedly his most faithful general, since he is the only other musician featured on all sixteen Iron Maiden albums, from Iron Maiden in 1980 to Book of Souls in 2015.

Still, his integration into the band wasn’t always the most obvious choice: after a destitute childhood and becoming a violent skinhead teen, discovering Hendrix changed his life and Murray auditioned for Maiden but the two guitar players that were already in the band felt threatened by the prodigy. Eventually, Harris decided to replace the other two with Murray, until he fired him too following a fight with Dennis Wilcock, who was the singer in the band at the time. Finally, Wilcock left the band and Murray was immediately brought back in.

Since then, each album got his fair share of fluid solos by Murray, with a powerful and lyrical legato. The golden-haired one does not take a huge part in songwriting (even though we owe him a few geat obscure songs like Charlotte the Harlot, Still Life et Déjà Vu), but his playing is instantly recognizable and it is part of the very definition of the Iron Maiden sound, even beyond the singers that were part of the band’s history (Paul Di’Anno, Bruce Dickinson and Blaze Bayley).

In 2009, Murray finally got his signature Fender Stratocaster, a black beauty with two humbuckers and a single coil inspired by his ‘57 Strat that belonged to Paul Kossoff. Another model followed in 2015. That one was made in mexico, with a sunburst finish and a rosewood fretboard, three humbuckers in a single-coil format and a Floyd Rose. He has sometimes been seen with a Les Paul, but overall Murray has remained faithful to the Strat for most of his career. A constant genius.