When Dean Zelinsky founded Dean Guitars in 1976, he was inspired by the best Gibson guitars. He offered the irreproachable quality and the painstakingly meticulous work that his modest luthier status afforded him, especially compared to the big Kalamazoo factory. A year later, he launched several original designs, among which the wonderful Cadillac, which blends together the cutaway of a Dean ML - another of his own designs which would become Dimebag Darrell’s preference - and the body of a Les Paul. With its radical yet classic design, the Cadillac has seduced Cannibal Corpse, Kansas or the Doobie Brothers.

This 1982 model was ordered by Iron Maiden guitarist Dave Murray. It was however singer Bruce Dickinson, who played it on stage. You read that right: Bruce Dickinson did play guitar on stage. It didn’t happen many times after that, since it did not go well at all. On january 11th 1985, the band was playing in Brazil for the first edition of the Rock in Rio festival, in front of a human flood of several hundred thousands of fans. On the song “Revelations”, from the classic 1983 album Piece of Mind, Dickinson took his Dean Cadillac and played rhythmic guitar, thus hinting at a sound the band would later develop with three full-time guitarists.

Carried away by his enthusiasm and his usual sense of showmanship, Dickinson heaved his guitar back and forth to the rhythm of the song and then disappeared. When he came back to end the song, his face was full of blood: he had thrown his guitar into the arch of his eyebrows. This Dean is indeed the historic Dean that knocked Dickinson out of showing off with a guitar on stage, but the singer forgave and forgot and signed the top. 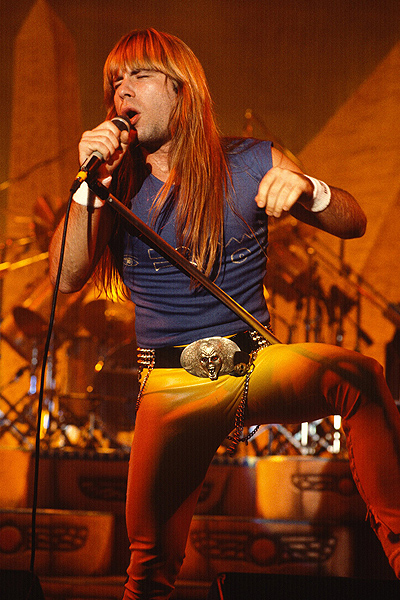 Bruce Dickinson is unquestionably the best heavy metal singer of all time, alongside Dio and Rob Halford. His mind-blowing range is only matched by his power and his showmanship. Of course, fault-finders will point out of special clothing choices (the bird mask for Flight of Icarus, or those oh-too-tight red leather pants), but where would Iron Maiden be without a hint of bad taste?

By the time Bruce joined Maiden, the band had already released two albums with Paul Di’Annon singing (Iron Maiden and Killers). Dickinson has been a roadie, a student of History at the uni, and a member of several bands, including Samson with which he opened for Iron Maiden. He finally auditionned for the band and got the gig in 1982. The first album they did together is none other than the all-time classic The Number of the Beast, the first record in a string of legendary released that feature Bruce’s impressively mighty voice: Piece of Mind (1983), Powerslave (1984), Somewhere in Time (1986) and Seventh Son of a Seventh Son (1988). Dickinson also write songs for the band, including gems like Two Minutes to Midnight and Flight of Icarus.

In 1989, Dickinson joined forces with Jannick Guers (who was not part of Maiden yet) for the soundtrack to the 5th installment of the Elm Street series, for which the pair recorded Bring Your Daughter to the Slaughter. Following that experience, he released his first solo album, Tattooed Millionaire. He started working with guitarist Roy Z who pushed him in a harder direction, almost industrial at time. By the time Balls to Picasso came out in 1992, he had decided to leave Iron Maiden. Then came the excellent Skunkworks (1996) in a darker direction, but he came back to the big Roy Z production for Accident of Birth (1997) and The Chemical Wedding (1998).

Eventually, in 1999, he returned to Iron Maiden with which they recorded the masterful Brave New World. From then on, many world tours and albums have followed, and Dickinson’s voice remains quite strong in spite of him turning 61 soon. In the meantime, Bruce has also learnt how to pilot an aircraft, and therefore he is the one piloting the band around in their private jet, which allowed them to tour in parts of the world that are usually ignored by world tours, in Latin America for instance. A true heavy metal Renaissance man, with very tight pants.