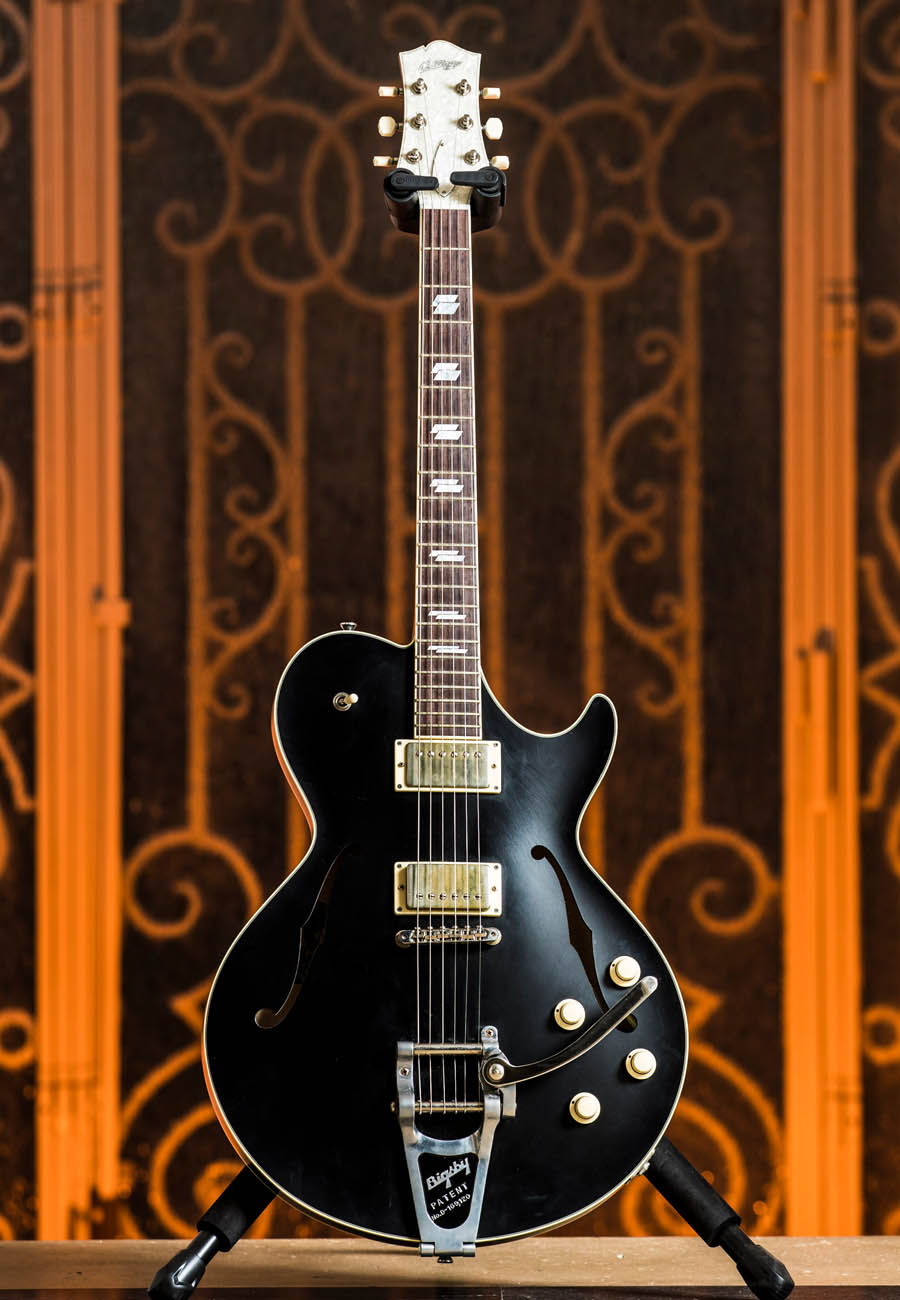 Collings is part of the smaller-scale brands (about fifty employees in the Austin, Texas workshop) on which players can rely to systematically reach excellence in their production, whether building acoustic guitars, mandolins or even electric guitars. In the latter domain, they build superb solibodies inspired by the Les Paul Junior and Special, but also semi-hollow guitars stemmed from the ES-335 with an absolutely flawless level of lutherie.

That quality was good enough for the very demanding J.D. Simo, who has been an ambassador of the brand for years, before he went to Gibson. This SoCo 16 LC (LC for its laminated maple) was the prototype of a signature model that would have been Simo’s, with a black satin finish that really showcases the wood’s patterns but is not listed among the “official” color chart of the brand. The abalone-covered headstock evoques the famous Gibson Century vintage guitars, and the Bigsby has been set up to perfection for a flexible feel and a good tuning stability. An internet video allows you to hear J.D. Simo extensively using the Bigsby on this Collings for a beautiful version of the song Don’t Waste Time.

What’s more, the pickups have been changed, and the replacement are a stunning addition to an already excellent guitar. The two humbuckers have been made by Ron Ellis, a very exclusive and mysterious builder with a reputation of keeping his customers waiting for years before they can reach they sonic Grail. Drew Smithers from the band Bishop Gunn fell under the spell of this beautiful Soco, and convinced Simo to sell it to him. And through Smithers it has arrived at Matt’s Guitar Shop. 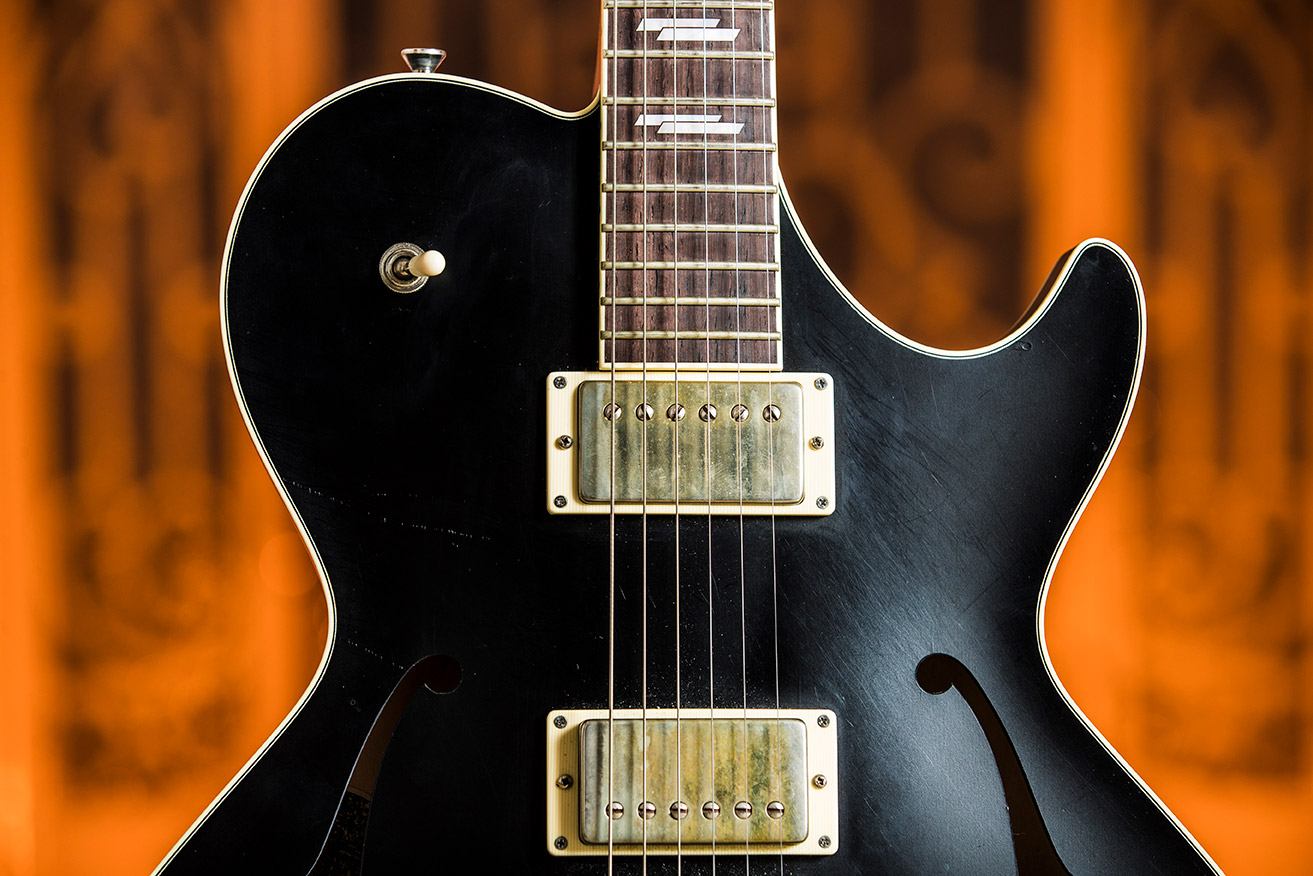 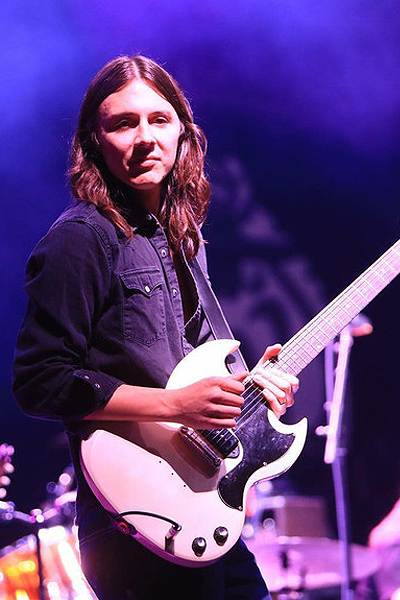 Rock critics spend their time writing about rock’s pending doom and the inevitable relegation of the electric guitar to the rank of a simple artifact of its former glory days. However, the new generation keeps on introducing us to undeniably talented musicians, players who understand where they come from but don’t forget where they’re going, who relentlessly tour the world and whose brilliant careers are only getting started.

Among the most interesting bands who have recently appeared, Bishop Gunn is among our very favorites. This fab four come from Natchez, Mississippi, a city in the Delta, where it all began a century ago. Incidentally, this town gives its name to the band’s debut album, which was recorded at the classic FAME and Muscle Shoals studios in Alabama. The band works old school: they all live in a farm outside Nashville, and spend all their time playing together. And when they’re not, it means they’re out on the road, getting noticed as opening acts for Marcus King, Slash and Lynyrd Skynyrd.

There is a deep Southern vibe to their music, between the Black Crowes and .38 Special, but guitarist Drew Smithers is also quite potent when it comes to saturated riffs à la Guns n’ Roses, and lyrical slide playing. For those who think there are no good rock bands anymore, we only have one answer: listen to Natchez by Bishop Gunn.