Carlos Santana may be mostly seen as a PRS player these days, and he has done a lot to bring worldwide recognition to the little brand from Maryland. But before that, he has gone through several guitar phases, starting with a bunch of SGs (including the legendary Special that he played at Woodstock), a Les Paul Custom that was his favorite for a while, and then moving on to more “modern” guitars (for the time!), such as a Gibson L6S or a Yamaha SG2000 in the mid-seventies, during a mystical period during which he was called Devadip and dressed in white.

This guitar would have been the perfect match for his outfit of the time, since that beautiful Les Paul / SG still has its original Polaris White finish. 1961 is the first year of production for that new shape, and back then that guitar was still called a Les Paul, as the small plaque between the neck and the neck pickup clearly indicates. This one is a Custom, meaning it has all the visual appointments of a Custom-level Les Paul (neck and headstock binding, first fret marker) and sports three humbuckers, in this case two PAFs and a middle pickup that has been handmade by Santana’s guitar tech.

Santana has bought that magnificent guitar second-hand in 1974, he had it refretted and has changed the pots which date back from 1975. The sideways vibrato was probably already off when he got it since there is no clearer spot where it would have been, so it was probably taken off very early. He also changed the case, using a very rare artist case made by Gibson in the seventies, a true collector’s item in excellent condition featuring a nice paisley pattern.

It is virtually impossible to know whether this is the guitar he used for his singles of that era like “Europa”, “Dance, Sister Dance” and “Let It Shine”, but some concerts-goer from the time remember seeing him with it. Also, the patina and wear is such that it must have been played a lot, to the point that the original gold hardware parts have almost turned to a natural nickel finish. Carlos finally let this one go in 2005, which proves that he had enjoyed playing it enough to justify keeping it for thirty-one years, even though endorsement guitars were basically thrown at him from everywhere. A stunning rare guitar owned by a stunning musician. 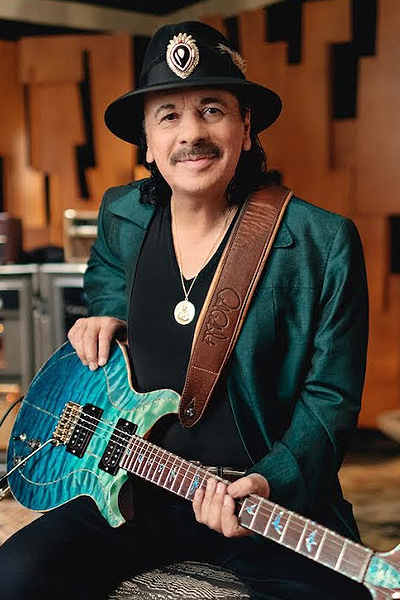 Carlos Santana is one of the very last guitar heroes of the late-sixties still standing. He started off as Bill Graham’s champion, since that promoter who owned the Fillmore was also a percussion player and was particularly fond of Carlos’ blend of rock, latin music and psychedelic San Francisco influences. Thanks to Graham, Carlos’ band, Santana, got to perform at the Woodstock festival. This legendary concert, back when their first album wasn’t even out, made them instant legends. They were also heavily featured in the Woodstock movie in 1970 with their instrumental Soul Sacrifice. Carlos’ stinging lines are a beautiful mixture of jazz-influenced modal phrases with more straightforward blues licks, and a big hot sound that would only get bigger and warmer through his career as he moved to early Mesa Boogie amplifiers.

After a string of hit singles (“Evil Ways”, “Oye Como Va”, “Black Magic Woman / Gypsy Queen”), the Santana band underwent a number of personnel changes (including future Journey-founder Neal Schon joining on guitar), which resulted in Carlos becoming the only master and commander. He then took his music in a more jazzy direction, collaborating with John McLaughlin and Alice Coltrane.

Finally, he got a late-career megahit with Supernatural in 1999, an album that fused his fluid lines with the voices of guest stars who were very hip at the time of recording. It has sold an astounding 30 million worldwide, has won eight Grammys and has introduced a new generation of faithfuls to Santana’s music.