Here at Matt’s Guitar Shop, we’ve managed to get our hands on a few Artist Proof Gibson guitars: those are the instruments made by the Custom Shop for the artists to approve before they start building the actual run. Those Artist Proof instruments are already rare as hen’s teeth, and rarely get sold outside of the musician’s inner circle, but Production Sample guitars are even harder to find. They are usually made to order for the artist themselves when they need a special instrument for a tour or recording, not necessarily with the intention of it ending up becoming a production model.

This SG was built as a Production Sample for Angus Young of AC/DC, as a spot-on replica of his famous Jaydee. Yes, a replica of an SG replica made by a luthier. Like his old faithful, this #1 has a neck-through, nylon saddles, Schaller tuners and a pickup ring for the treble pickup even though there’s a large pickguard. The neck-through makes it very different from what eventually became Young’s second signature SG with Gibson, who looked a lot like this Production Sample but was structurally quite different. Since the signature SG was released in 2009 and that Production Sample was made in 2007, it’s not hard to imagine that this very guitar prompted Angus Young to accept the signature deal. But this one rings louder, sounds clearer and has more sustain, even though it has the same Seymour Duncan Pearly Gates humbuckers. Moreover, the relicing job is simply stunning on this one: it is one of the most authentic-looking we’ve seen in ages. 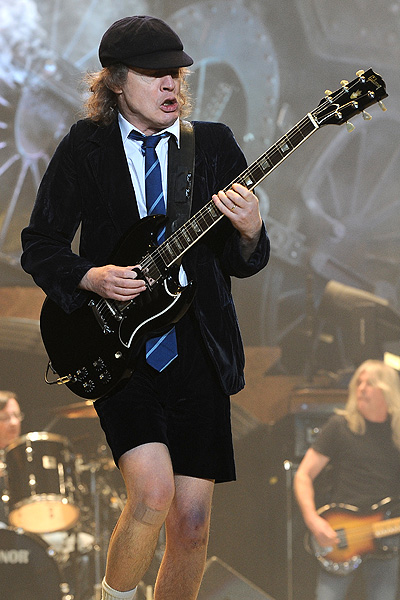 With the exception of the Rolling Stones, few great bands have had the longevity of AC/DC. Since 1973, the bad boys from Sydney have been playing the same binary, bluesy and energetic rock, like an over amplified version of John Lee Hooker. The band even made it through Bon Scott’s death, replacing their charismatic singer with Brian Johnson in 1980. Even Malcolm Young, founder and rhythm guitarist of the quintet, had to leave the band in 2014 for health reasons.

Throughout the band’s career, only one member has always been present: Angus Young, Malcolm’s brother, who was only seventeen when the band started out. In the meantime, the schoolboy has played the world’s biggest stage without ever betraying AC/DC: no solo album, no guest featuring for other artists. If you enjoy Angus’ playing, you can only hear it on the band’s twenty albums. Angus’ style is inseparable from the sound of AC/DC, and it perfectly blends together B.B. King’s blues bends, Chuck Berry’s double stops and Paul Kossoff’s vocal vibrato.

As every musician who has worked with him will testify, Angus has a strong, almost obsessional work ethic. He doesn’t party with his bandmates, only drinks tea and gets back to his hotel room as soon as he can to smoke cigarettes and practice. His choice of instrument also shows a very strong stubborn mind, since he has never played anything else than a SG. Ever since the band’s beginnings, the two-cutaway Gibson model has always been Angus’ weapon, under a few different forms: cherry red, black, with or without a vibrola, with or without lightning inlays. After half a century spent playing the same notes in the same band on the same guitars, Angus’ integrity remains unmatched.