John Mayer started his career as the worthy heir to Hendrix, riding the lightning coming from his Strat in his power trio. Then in 2012, everything changed, and the Born And Raised album introduced a new side of Mayer as a Laurel Canyon-style songwriter, between Neil Young and James Taylor. Mayer's obsession with instruments coming out of Nazareth dates back to the era, and John has reached an almost Clapton-like amount of Martin guitars to his name.

The latest one is also the most spectacular, since this is a mayeresque variation on the theme of the ultimate acoustic guitar, the D-45. NAMM 2018 was all about this model, which is really easy to understand once you hold that guitar in your hands. Beyond what you expect from such an elite instrument, like luxurious fretboard inlays, abalone bindings that require many hours of minute work, and the superb vertical headstock logo on rosewood, that guitar gets the Mayer signature treatment of a very ornate rosette that is also inlaid in the fretboard. Even for a very capable luthier, this is an absolute tour de force.

Choices of woods and specs reveal a deep understanding of what makes an excellent dreadnought, with help from Martin's own Custom Shop. The X bracing is forward shifted, the top is made of Engelmann spruce, the body is Guatemala rosewood, the nuts are bone and the mahogany neck has a substantial feel that fills your hand with sensuality. Two cowboy chords are enough to irredeemably fall in love with that magnificent guitar, and a third chords will undoubtedly inspire a song. Only forty five D-45 John Mayer were made, so not everyone will get to be inspired. 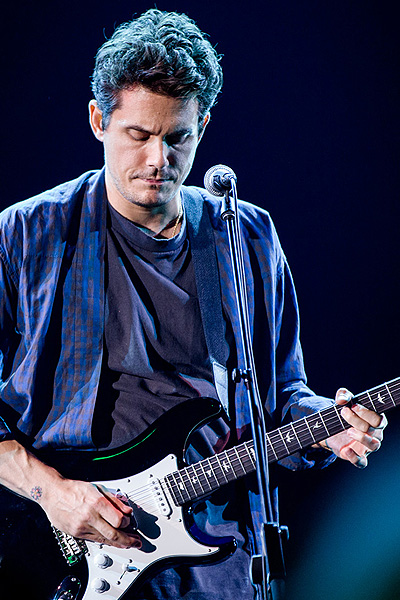 Each generation has a guitar player in charge of reminding them how vital and timeless blues is. The eighties had Stevie Ray Vaughan, the nineties had Clapton unplugged, and John Mayer was the one preaching the good word of the twelve bar blues in the noughties.

He started off as an acoustic romantic singer (Your Body Is A Wonderland, which he wrote when he was only fourteen), and reinvented himself as the voodoo child of the next millennium. With Heavier Things (2003) and Continuum (2006), Mayer showed how good he was with a Strat and ruled his power trio with an expert hand (Pino Palladino on bass and Steve Jordan on drums, it doesn’t really get better than that). He became the new reference for amateurs of a great guitar song and shared the stage with Clapton, Buddy Guy and B.B. King. He also found commercial success with four million copies of Continuum sold and three Grammy Awards.

Mayer being smart and conscious that this formula would eventually lost its steam, he successfully reinvented himself with Born And Raised in 2012. From the Strat-Custom-Shop-on-a-Two-Rock-amp guy, he went on to become a country rock West Coast songwriter with a Martin D-45 in his hand. The result is a superb album that Mayer couldn’t tour because of health issues.

Recently, John became enamoured with the Grateful Dead’s music, and therefore joined Dead & Company along with three former members of the California institution. Once again taking everyone by surprise, Mayer is perfect for that new role and manages to respect Jerry Garcia’s heritage and still keep his personal style. In another unexpected change, Mayer has let go of his Strats in favour of a PRS that created a storm, the Silver Sky. Mayer’s next artistic moves are unpredictable, but it’s a safe bet that they will be fascinating.