An extremely high-class model among the many Jazz signatures in the Gibson catalogue, the Tal Farlow was produced from 1962 to 1967 and only 215 were made in that five-year span, making them rare and desirable collector’s pieces. But this one is in a category all of its own: it is the prototype made two years before the first production model, and, above all, it was Tal’s personal guitar. Unlike most musicians who put their signature on a model but hardly ever use it, Farlow remained faithful to the same instrument throughout his career.

As a result, this beautiful blonde specimen was played almost exclusively by the master for 38 years, from 1960 until his death in 1998. Obviously, they can be seen together in many photos and videos.

Tal’s lifetime companion is very easily identifiable in several ways. There is the pickup selector, surrounded by a special ring, which is placed below the cut-out rather than under the bridge pickup. The headstock and fingerboard inlays are different from those finally chosen for the production model, and of course there is the additional pickup, a DeArmond added by Farlow himself to trigger an octaver effect. And then of course there is the sunburst finish, which was originally cherry but faded to lemon over time, the top was transformed into a blonde through being played by its owner. Under the pick guard, the original red remains, like those seen on the sunbursts of that era. This prototype shares the same varnish and colours as those dear Les Pauls.

The two original pickups are PAFs and of course sound great for jazz, but they have a lot of bite for overdrive too. This guitar is an important part of jazz history, and a central part of Tal Farlow’s career. 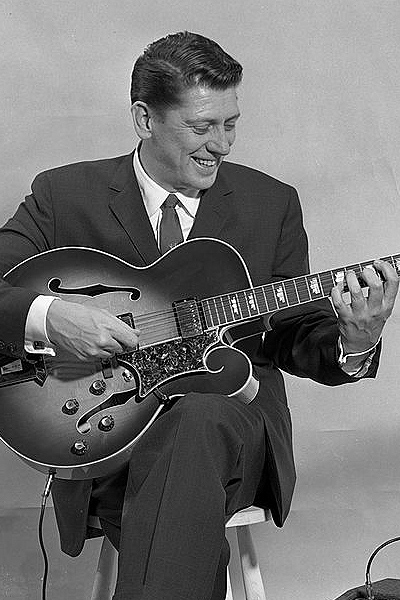 Main guitar : Gibson Tal Farlow
An absolute “must-hear” track : I Thought About You

Of all the giants of jazz guitar, Tal Farlow is probably the one who has had the most complicated career. For a virtuoso, he started playing very late in life, only picking up the instrument at the age of 21. Before that, he had made his debut on a ukulele, and from that he retained a tendency to use the four highest strings (which are tuned like the four strings of a ukulele) to play his melodies.

Farlow caught up very quickly, helped by his incredibly long hands (which earned him his nickname: “The Octopus”) and an unrivalled sense of melody. His modern, fast, intelligent and rhythmically advanced approach caught the attention of Charles Mingus and Artie Shaw. He also developed a very personal technique of struck harmonics that give the impression of hearing a harp, on Skylark for example.

Farlow was extremely prolific during the first part of his solo career, recording no less than eleven albums between 1954 and 1958. However, after getting married, he completely stopped his musical endeavours and devoted himself to the humble occupation of billboard painting. Strangely enough, Gibson still made him a signature model in 1962, but his lack of success, probably due to Farlow’s absence from recording, meant that no more of his guitars would be manufactured after 1967.

In the end, Tal gradually emerged from his retirement in 1969, but without returning to his earlier frenetic pace of production. This new Farlow had lost none of his musicality and virtuosity, and he still played on the prototype of his signature model made by Gibson in 1960. Apart from a few rare experiments (notably a Gibson ¾ model entirely repainted in red), Farlow remained faithful to that instrument until the end.