In the mid-1960s, before he became the master of tremolo blues playing with Free, Paul Kossoff already wanted a Les Paul. Genuine Gibsons were an extremely rare commodity in London at the time, and after starting with a Les Paul Junior, it was thanks to a trip to the USA by his father, the actor David Kossoff, that the young Paul received his first real Les Paul.

It was not yet the Sunburst or Gold Top that he would play on the Isle of Wight stage, but a 1955 Les Paul Custom. That second year of production corresponds to the first version of the Black Beauty, before the arrival of humbucker pickups. Instead, it has a P90 at the bridge position and an Alnico “Staple” neck pickup. Kossoff couldn’t bear to see his precious guitar turn yellow at the binding, so he removed the lacquer. The resulting absence of varnish means that the bindings are still white more than fifty years later, and make this Les Paul identifiable at first glance in the pictures of Koss playing it in his first band, Black Cat Bones.

But it can also be identified in a photo of Clapton at The Marquee in 1967, on Cream’s tour for the Disraeli Gears album. This black beauty is also said to have passed through Duff McKagan’s hands before arriving at Matt’s Guitar Shop. One thing is certain: after all these years, the little pieces of paper taped into the electronics cavities on which Kossoff wrote his name are still in the guitar, as if it could never completely belong to another. 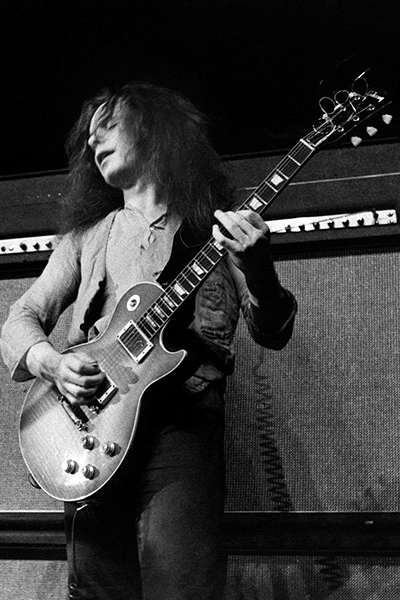 Paul Kossoff, Koss to his friends, is one of those great injustices in the world of the guitar: where so many of his contemporaries have become legends in the history of rock music and veritable living guitar gods, Kossoff is often forgotten when we talk about the geniuses of the electric blues. And yet, he is very much on a par with the Eric Claptons, Jeff Becks, and Jimmy Pages of this world. He handles the thick electricity of his Les Paul with the finesse of a samurai. The impeccable accuracy of his bends and his very lyrical and human tremolo inspired those who know him. Starting with Angus Young, who owes him a lot.

Koss was a big talent at an early age, and was quickly recognised as such in the British blues scene. He founded Black Cat Bones in 1965 at the tender age of 15. That band often opened for Fleetwood Mac, whose guitarist Peter Green was a major influence on Koss’ approach to the instrument. Three years later, in 1968, he kept on the Black Cat Bones drummer Simon Kirke and formed Free with singer Paul Rodgers and the brilliant bassist Andy Fraser. The latter had joined John Mayall’s band The Bluesbreakers when he was only 15. Free then became the ultimate hard blues band, in which each musician was a benchmark in his category.

They hit the big time with their third album, Fire And Water (1970), and its single All Right Now. The group made a big impression during their performance at the Isle of Wight Festival, but finally broke up a few months later. Kossoff then released his solo album Back Street Crawler (1973), a track that then became the name of the band with which he recorded his last two albums. In 1976, the junkie lifestyle caught up with him and he died at just 25.

Kossoff’s sound is closely associated with the Les Paul. He started out on a Junior model and then graduated to a 1955 Custom. But it is with the Standard and its humbuckers that he really found the electric sound he was looking for. He had five sunbursts (one of them had been sanded to a natural finish), as well as a 1957 Custom with its three PAF pickups. On Back Street Crawler, we see him with a 1957 Strat that would later become the main instrument of Dave Murray (Iron Maiden). From the Prince of the British Blues to the pioneer of heavy metal, some Strats have been luckier than others.